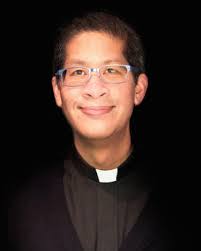 Rev. Ricky Manalo, CSP, Ph.D. is a Paulist priest, liturgical composer, and author. He is the recipient of the 2018 Pastoral Musician of the Year Award by the National Association of Pastoral Musicians. He studied composition and piano at the Manhattan School of Music, theology at the Washington Theological Union, and liturgy, culture, and sociology at the Graduate Theological Union (GTU), Berkeley, CA. Some of his best known hymns include:

Fr. Manalo is also known for pioneering and popularizing Asian Catholic liturgical music in the United States with his hymns, including:

His music has been sung during the Papal Masses of John Paul II, Benedict XVI, and Francis. More recently, his Mass of Spirit and Grace was the musical setting chosen for Pope Francis’ Eucharistic celebration in the Sheikh Zayed Stadium in Abu Dhabi on Feb. 5, 2019. This event was the largest gathering of Christians in the history of the Arab Peninsula (160,000+ worshippers, including 4,000 Muslims), and it was the first time a Roman Catholic Mass was ever celebrated “in public” in this region.

He has written numerous articles and books on liturgy, culture, and liturgical music. His first book, Chanting On Our Behalf, Revised Edition won the first place award for Best e-Book by the Catholic Press Association. His second book, The Liturgy of Life: The Interrelationship of Sunday Eucharist and Everyday Worship Practices was a finalist for the 2015 Excellence in Publishing Awards by the Association of Catholic Publishers. He is a member of the North American Academy of Liturgy, the Catholic Theological Society of America, the International Societas Liturgica and NPM (board member, 2008-12).

In 2007, his collaborative hymn, “That All May Be One In Christ,” won the National Hymn Competition of the National Association of Pastoral Musicians (NPM).

Fr. Manalo is a theological consultor for the USCCB and co-authored a national pastoral plan for U.S. Asian Pacific Catholics, (Encountering Christ in Harmony, 2018). He remains an advisor to the U.S. Bishops’ Committee on Cultural Diversity in the Church and the Committee on Divine Worship, and collaborated on the historical book A Treasured Presence, discussing Filipino Catholics in the United States.

Fr. Manalo has been invited to 6 of the 7 continents to lecture, preach, and present workshops and concerts including Abu Dhabi, Al-Ayn, Amsterdam, Beijing, Dubai, Guam, Hong Kong, Honolulu, Kenya, London, Germany (Wurzburg), New Zealand (Auckland and Wellington), the Philippines (Manila and Malolos), Sidney, Singapore, Seoul, and Thailand (Hua Hin), and Tokyo. When he is not traveling throughout the world, he resides at St. Paul the Apostle Church in New York City.

An error has occured: