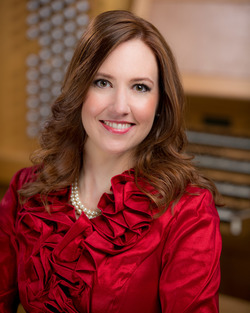 Crista Miller is the Director of Music and Cathedral Organist at Houston’s Co-Cathedral of the Sacred Heart where she leads the adult and children’s choirs and the concert series, and chaired the organ committee for Martin Pasi’s landmark Opus 19 organ.  Crista performs under  EastWest Organists and serves on the steering committee of Conference of Roman Catholic Church Musicians.

A solo recitalist active in Europe and the USA, she has performed in France, Spain, Italy, the Czech Republic, Denmark, Sweden, Canada, Lebanon, Ireland (2017) and Germany (2017).  Featured appearances at festivals include the Terra Sancta Organ Festival/Festival de l’Orgue au Liban; the Svendbørg International Organ Festival; the Festival de Órgano de Asturias Cajastur; the Region VII convention of the American Guild of Organists and as choral conductor for Compline at AGO Houston 2016.  An award-winner in international and national playing competitions (Odense, Denmark; Fort Wayne; San Antonio; and a semi-finalist in the AGO’s National Young Artists’ Competition in Organ Playing), she was the first American and first woman to play an organ recital in Lebanon and the first organist to receive an individual artist grant from the Houston Arts Alliance for her multi-media performances Projections in 2014.   Her double CD debut of Bonjour and Willkommen is available from Acis Productions and her research on Middle-Eastern elements in the music of Naji Hakim has been published in ORGAN: Journal für die Orgel and Mystic Modern: The Music, Thought, and Legacy of Charles Tournemire.    Upcoming conference presentations include “Prophetic Voice: Gregorian Chant in Contexto Historico” for the Archdiocese of New York’s St. Joseph Seminary and College; Prairie Voices: A MUSForum Conference in Omaha, Nebraska; and Loyola University/Chicago AGO.

Crista earned the DMA and the Sacred Music Diploma at the Eastman School of Music in Rochester, New York, and the Master of Music in Organ Performance under Dr. Robert Bates.

An error has occured: